Casinos, big hotels, wild nights out and hangovers are typically what comes to mind when you think of Las Vegas. When I told some friends I was going to a meeting in Las Vegas about cycling, they actually laughed. “People don’t ride bikes in Las Vegas!”

I wasn’t sure what to expect myself, but after meeting Ron Floth, from RTC, and getting shown around Downtown Las Vegas, I was pleasantly surprised.

Firstly, it’s important to understand that there are two main parts to Las Vegas. There’s the original Las Vegas - ‘Downtown’, and then the much newer area - ‘The Strip’. The Strip is where all the big new hotels and casinos are and where most people stay and visit these days.

Downtown is a much more normal city. Compared to The Strip, Downtown is more chilled out, has about 10x more bike lanes and about 100x fewer drunk people walking around at 7am. 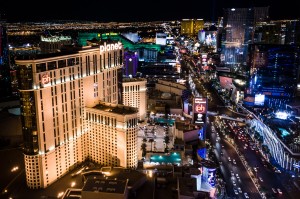 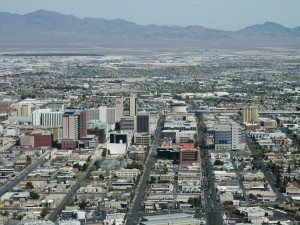 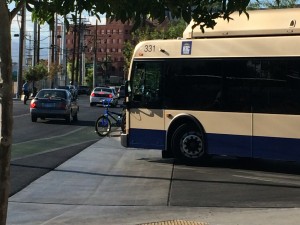 Almost all the busses in Las Vegas have bike racks on the front. About 50,000 bikes are taken on busses each month – pretty impressive.

Like most American cities, urban sprawl is a problem. There are some good and fairly frequent bus routes in and around Las Vegas. With a spread out city, the distances to walk to a frequent bus route are quite far, however, if people travel by bike to a bus stop this increases the number of people who can quickly and easily access a bus route. 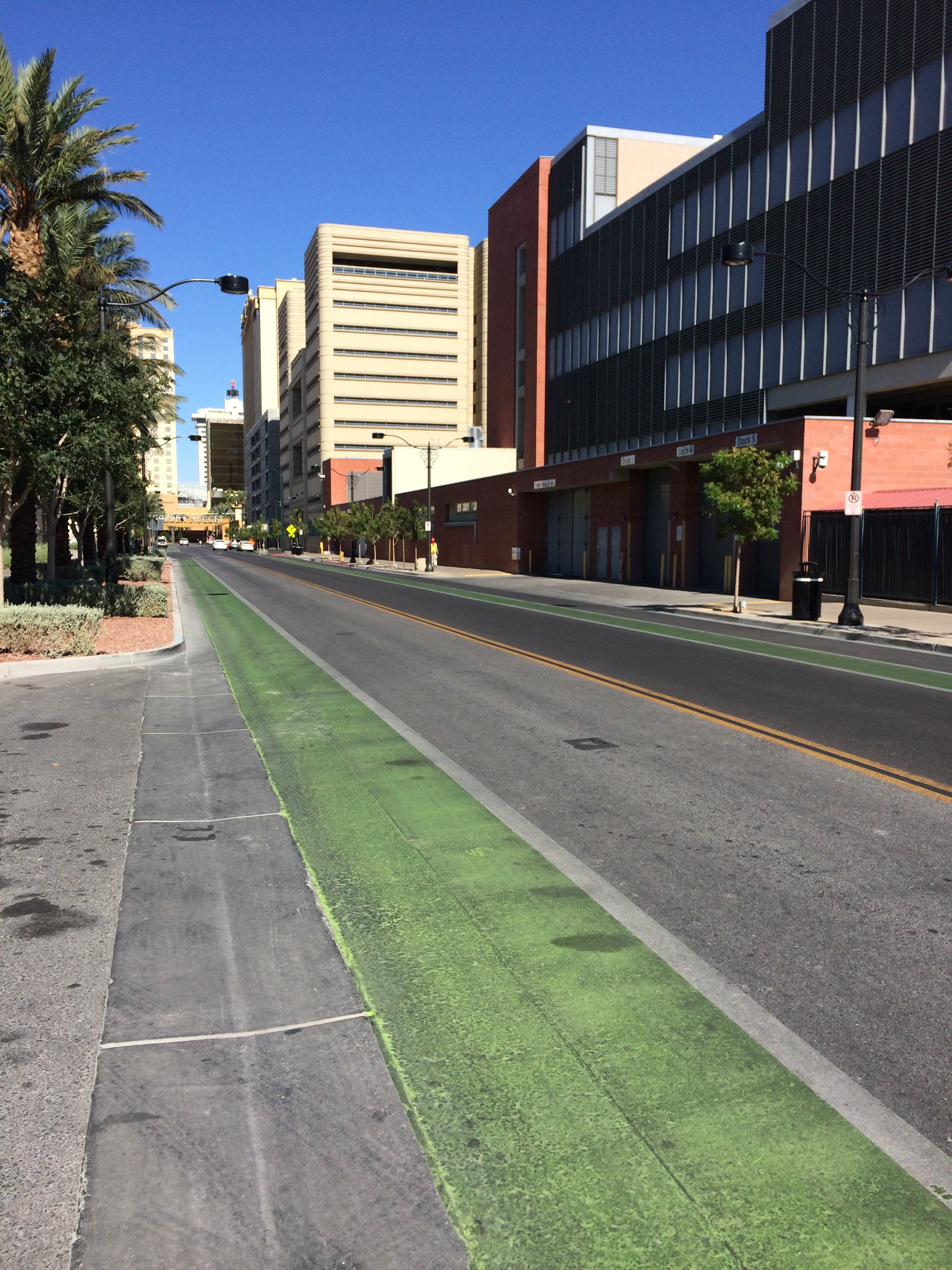 Bike lanes on both sides of the street. Many North American cities have streets wide enough for bike lanes, unlike many older European towns and cities which can have narrow streets. While fully separated lanes can be the gold standard for 8 to 80 cities, painted lanes can be a relatively inexpensive measure on the path to becoming a more cycle friendly city and increasing ridership.

Here is a bike map of Downtown Las Vegas: 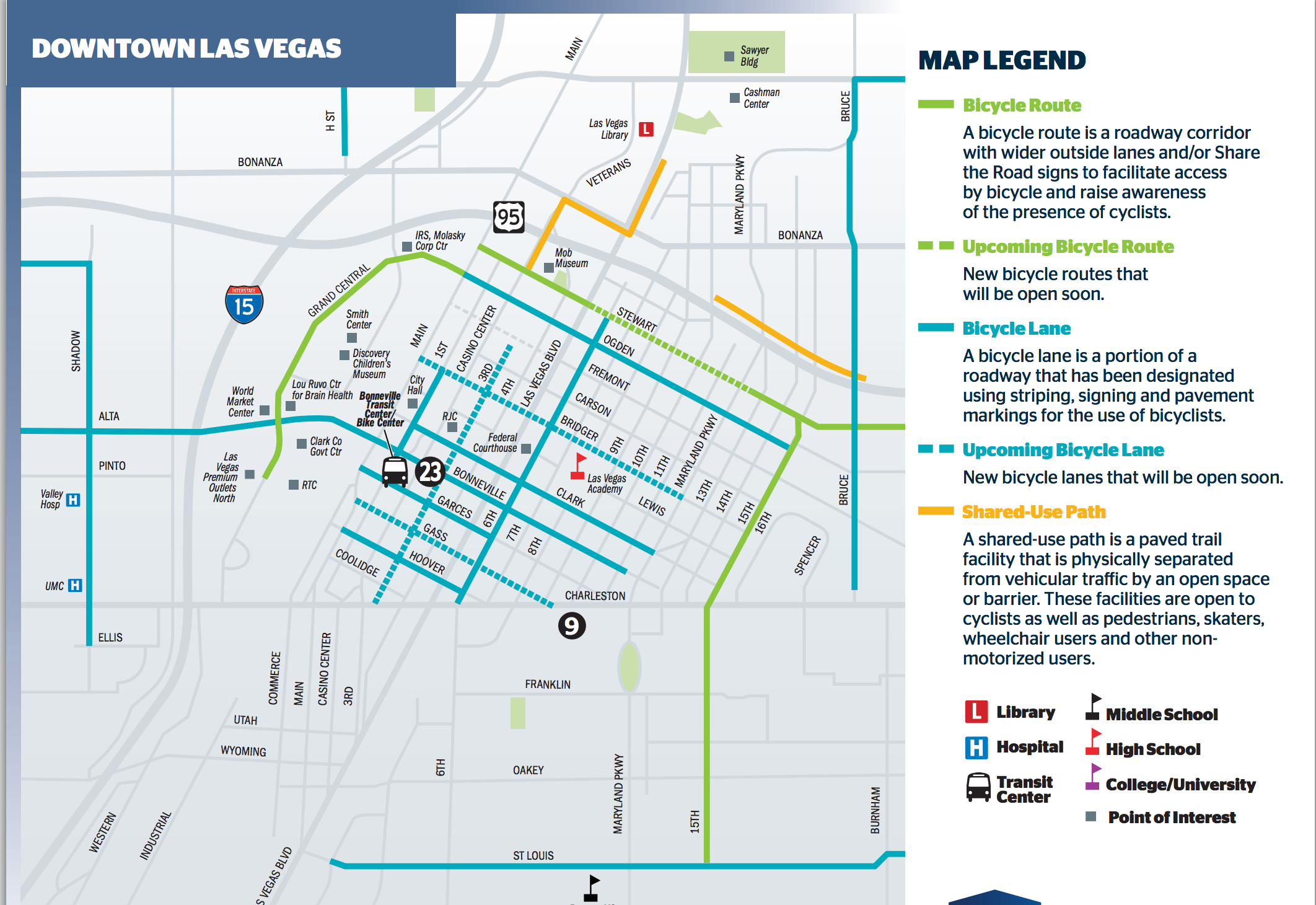 At the transit centre in Downtown Las Vegas there is a bike centre. People can get their bike repaired, buy a bike, store their bike and take a shower. Having the bike centre so close to public transit has a number of natural advantages. 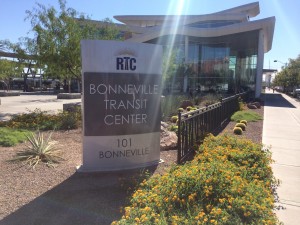 Positioned next to the main bus station in Downtown is the Bike Centre. 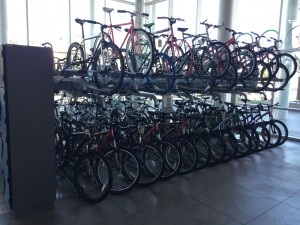 You can store you bike safely, rent or buy a bike there. 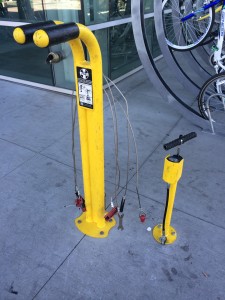 Tools and a pump are available right outside the bike centre. 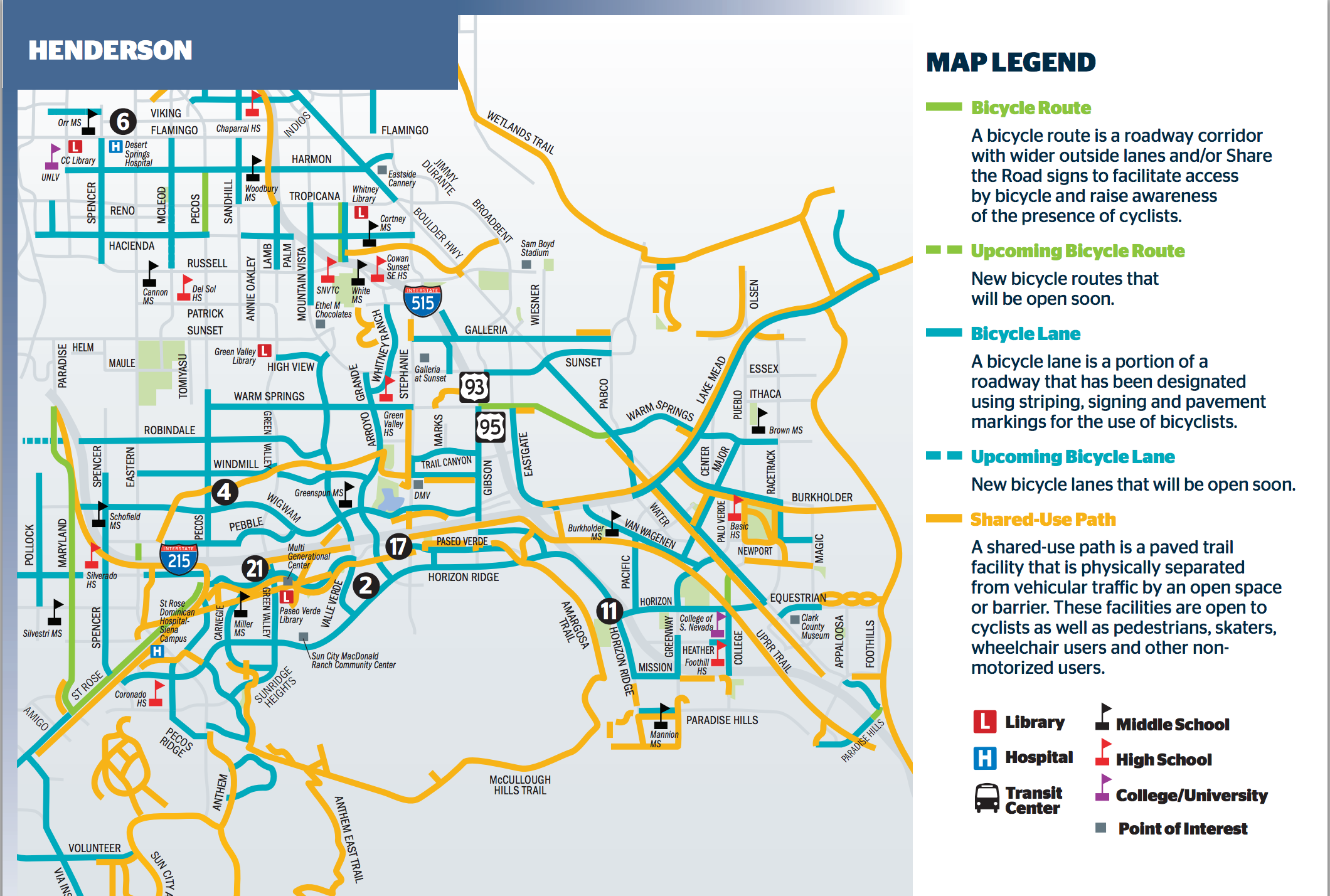 A bike map of Henderson - look at all those off road bike/walk trails!

The majority of the riding that is currently done in Las Vegas is recreational riding. When we are discussing how we can get more people riding for transport trips, one thing that we need to consider is the behavior change journey.

For most new riders, going from not cycling at all to riding to work is a mountain to high. Thus starting off riding recreationally can be a key strategy to encouraging cycling for transportation in the long term. Once people are confident and capable riders, they can then consider riding for transportation as a real option for them.

That’s why with our Workplace Bike Challenge program, we get people to take up riding one step at a time. 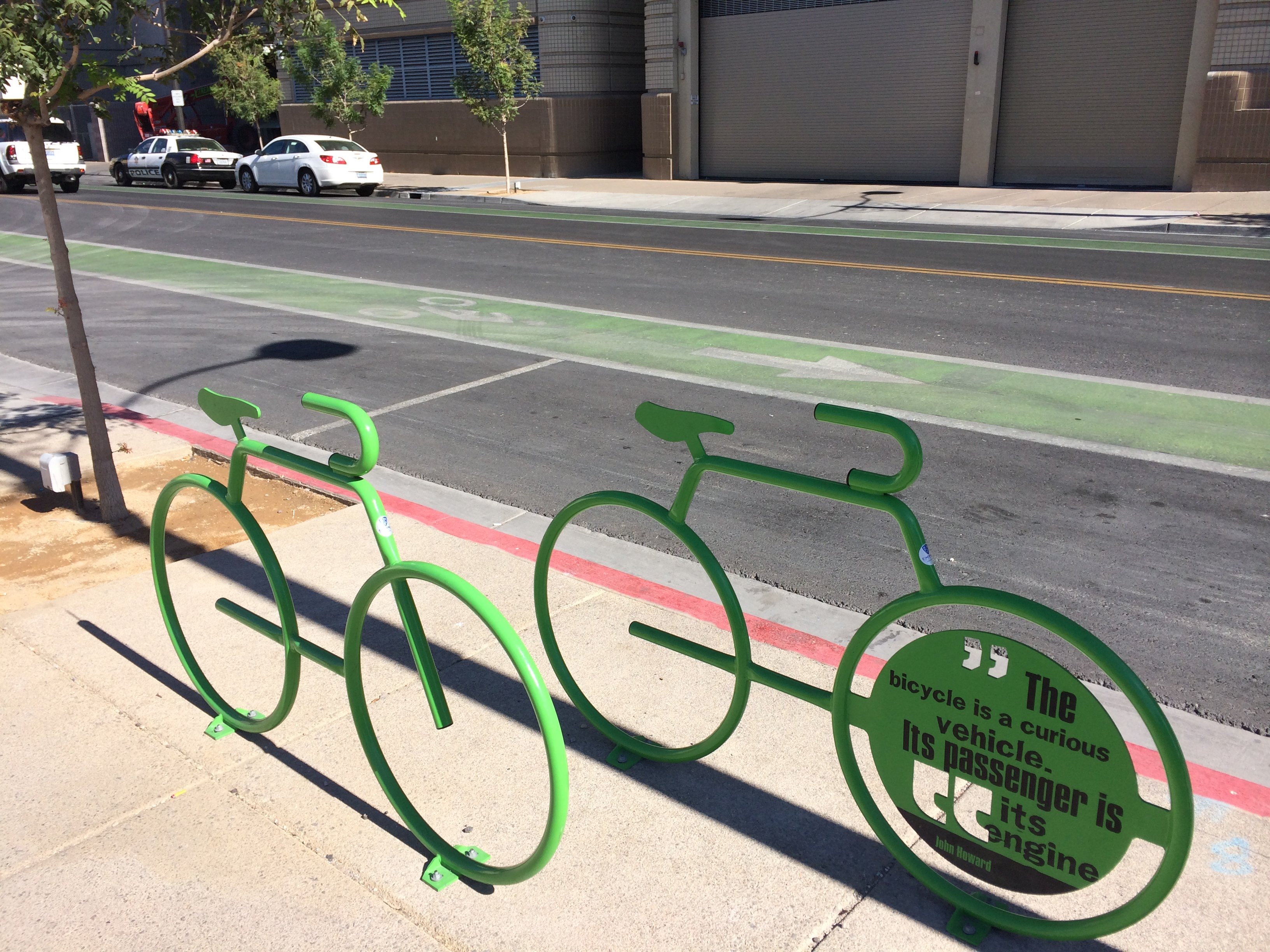 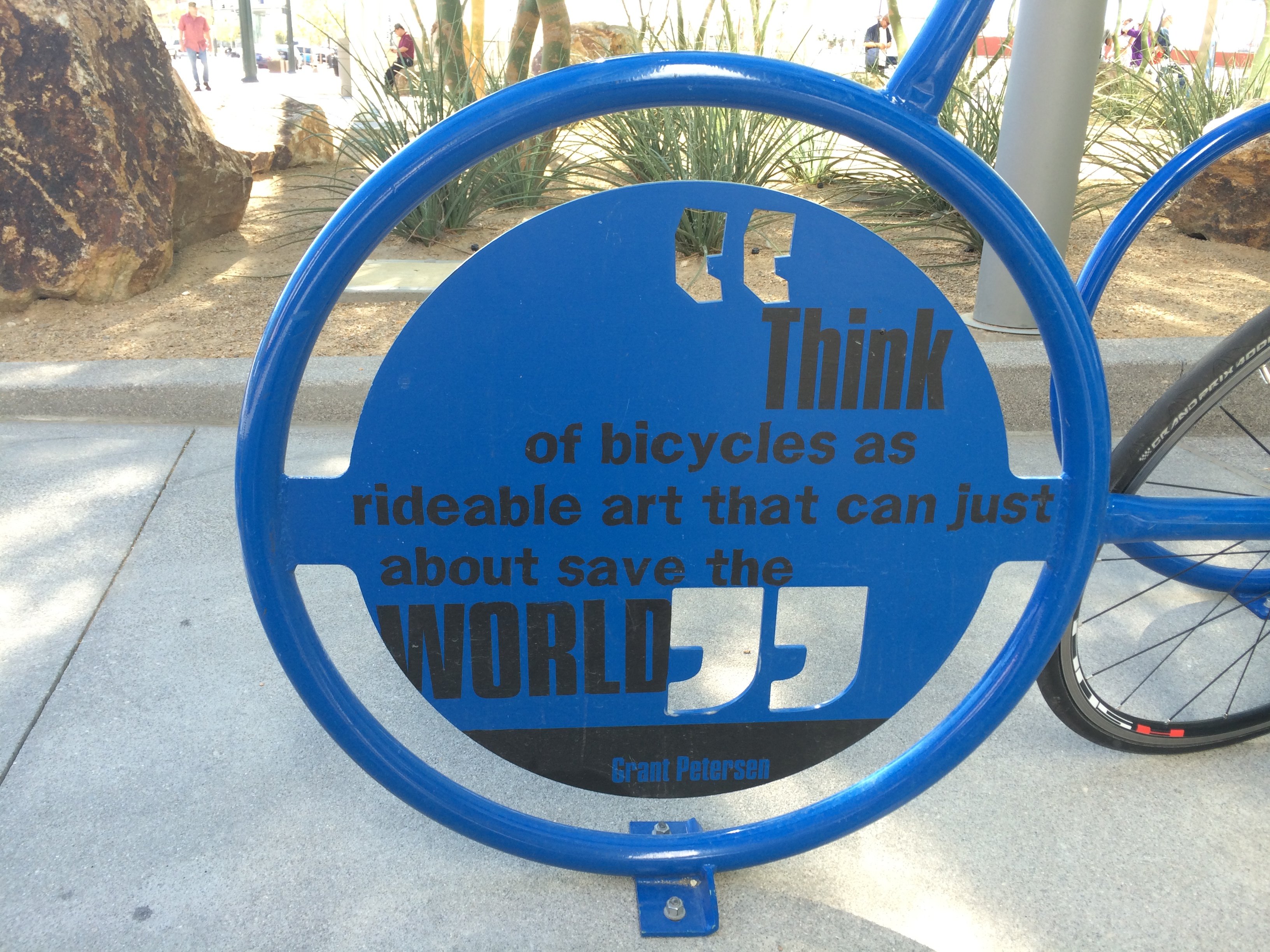 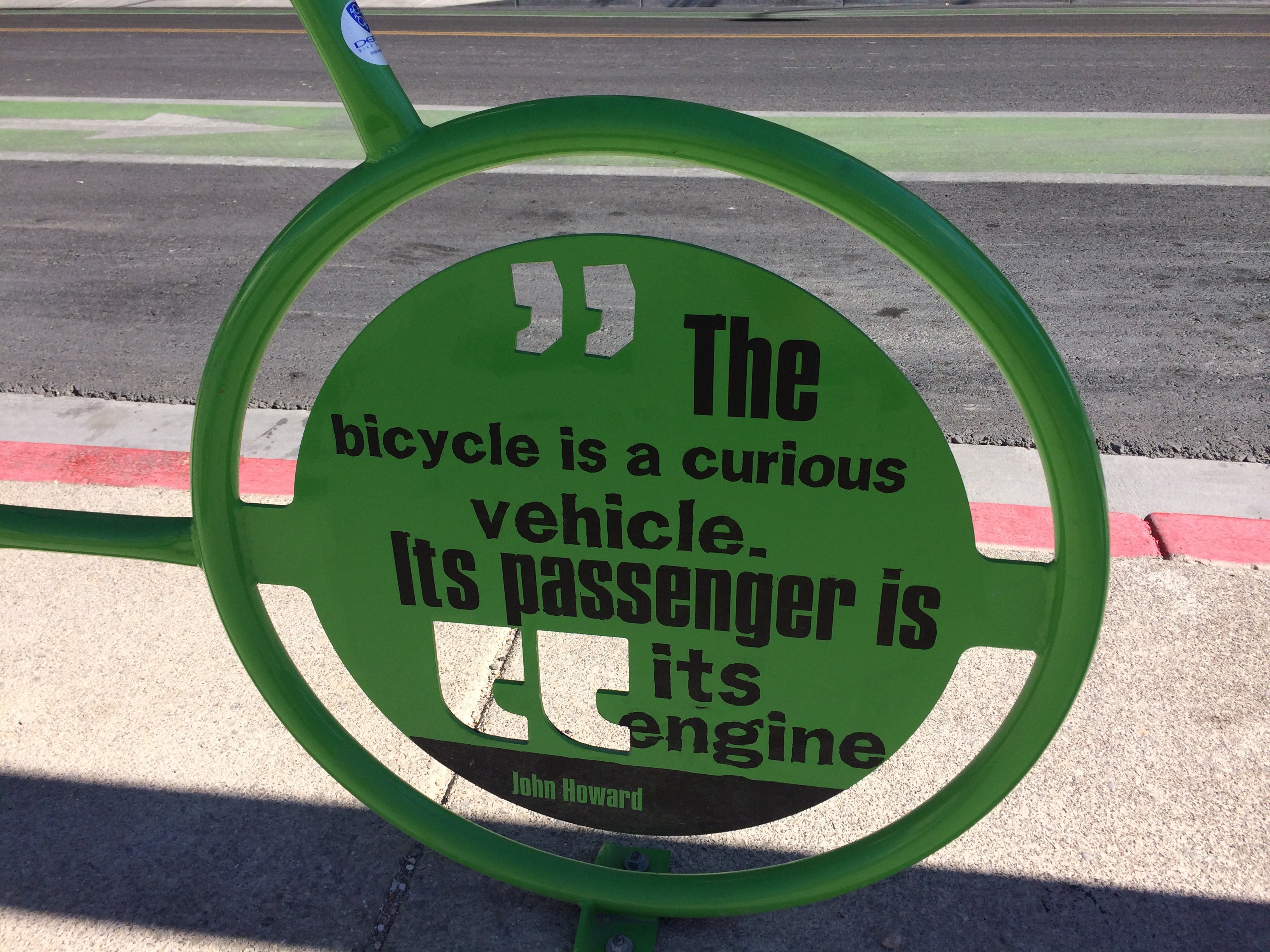 The Las Vegas case study demonstrates that cities with hot summer climates and urban sprawl can still do quite a lot to encourage riding.  With so many lanes, paths, racks on busses, the challenge now is to get more and more people to start riding in Las Vegas which will further increase demand for more infrastructure and facilities for people who ride bikes.