The University of Sheffield won Cycle September in 2017 and they're aiming to replicate their staff's success with students this year through the DfT-funded Love to Ride/NUS Sustainability project, UniCycle. On Monday the University opened its fantastic new cycling facility.

“People want to cycle,” said Darren Hardwick, the University of Sheffield’s Sustainable Travel Manager. “And we hope that our new Cycle Hub will attract a wider cross section of people to cycle to the University this year.”

The new facility will provide secure indoor parking for 168 bicycles, along with shower facilities and 80 lockers for kit. “It shows students and staff that we take cycling seriously,” said Darren.

The University has been awarded the ‘most cycle-friendly workplace in the UK’ accolade in recent years, and last year won the national Cycle September title for large employers for the number of cycling trips made, and encouragement of new cyclists.

Around 10% of University staff cycle to work regularly, a figure comparable to many progressive companies in London where increased government funding has seen cycling rates increase rapidly over recent years, and the University have liaised with cycling staff about new routes and facilities around University sites.

Security is an ongoing issue for commuter cyclists, with reports that owners of more expensive bikes are being repeatedly targeted, sometimes by thieves monitoring phone apps like Strava.

The new facility is one response to the issue, said Darren, along with working with South Yorkshire Police and even equipping the University’s own security staff with bicycles to travel around the campus.

“Helping cyclists is one of the things we look at as a good employer,” he added. “I’d say to local companies of any size, talk to your employees to see what they need to help them cycle more. And if you’re interested in improving your cycle security, get in touch if you want to come here and take a look.” 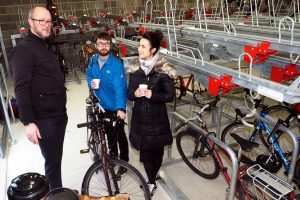