South Yorkshire’s Love to Ride programme saw its first prizewinner of 2018 when Ross Hall from Plusnet landed a £750 mountain bike.

Over 2,100 local cyclists from over 190 local organisations are taking part in Love to Ride South Yorkshire, part of the region’s Inmotion! Sustainable Travel initiative, funded through a £7.5m Access Fund for Sustainable Travel grant from the government.

Participants are aiming to help promote cycling as transport to their workmates and other local companies, while also being in the pot for local and national prizes such as free bikes and holidays. Participants gain points for miles cycled on or off road, for leisure or work journeys, and for encouraging friends or colleague to start cycling more often too.

Ross bagged his Focus Whistler mountain bike at JE James Cycles, keen supporters of the free Love to Ride scheme, with their own team taking part. 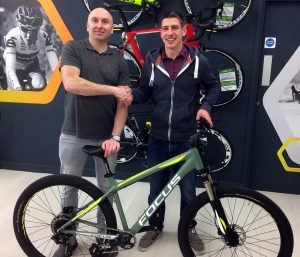 “As a family business, we want to support our cycling community, and Love to Ride is a fantastic way of rewarding those cyclists who brave whatever weather greets them every morning, and ride to work. We are so proud to be a part of something that encourages people to cycle more often,” said John Elliss from JE James.

Local Access Fund officer Paul Sullivan said: “Nearly 200 companies have already demonstrated their support for cycling and also their understanding of the benefits it brings to them and their staff, and we’re really pleased that a South Yorkshire rider has already won one of the national prizes!  Later on in the year we will be offering free try outs of electric bikes in Sheffield, just register your workplace on Love to Ride and we will be in touch.”

John Elliss said staff at JE James have seen an increase in people getting out on their bikes.

“Whether it be for fitness, to save money, the love of the outdoors or just a way of clearing the mind, there has been no better time to commute on a bicycle, with company cycle schemes helping reduce the cost of a bike, the emergence of electric bikes helping remove people’s barriers to cycling to work and just the more positive attitude by local councils to cycling. It all means that people are leaving their car keys at home and taking to the road on their bikes. The Love to Ride scheme gives people a goal to strive for and adds another dimension to their daily commute!”