How the University of Sheffield Gets More People On Bikes

The University of Sheffield is a leader in promoting sustainable transport and has been one of the most successful Love to Ride workplaces over recent years, winning Cycle September in 2017 and topping the student leaderboard in the inaugural UniCycle Challenge in 2018. David Bocking has the scoop on how the University has helped thousands to ditch their cars and spearheaded the ongoing transformation of Sheffield into a cycling city.

From his office high in the University’s Arts Tower, Darren Hardwick gets to look down at central Sheffield, reflect on visits to Denmark and the Netherlands and wonder how the Outdoor City could do better.
“Sometimes I can see how bad the air pollution is, with a yellow hue across the city, and think that’s what we’re breathing in - you can actually see it!”
In his case, however, he can close the window, take a deep breath and know he’s actively doing something to help. The University recently contributed the bulk of the cost for a set of Dutch style cycle and walking routes linking the University to the city, for example. 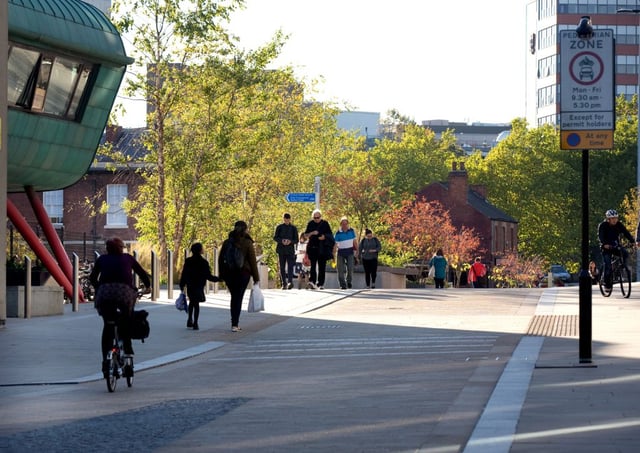 The Portobello cycle and walking route to the University
Sheffield University’s ‘Integrated Transport Policy’ came of age this year. 21 years ago, when almost two thirds of staff drove to work, the University decided to take local pollution and congestion seriously, and only allocate a staff car parking place according to need (via a points system).
A small fee for the privilege of parking at work raises around half a million pounds a year for initiatives to help staff travel on foot, by bike or by public transport.
“We say to people they’re not paying for a car parking space, they’re actually paying for someone else to not drive to work,” Darren said.
Now, nearly 70% of the University’s 8,500 staff have forgone ‘travelling stuck in single boxes’ as he puts it, with over a third commuting ‘actively’ which means they walk, cycle, or in some cases, run to work.
The key is to ask staff why they drive, and what could be put in place to help them walk or cycle instead, Darren says, such as the University’s 170 place secure cycle parking hub, along with a cycling security team patrolling the campus. 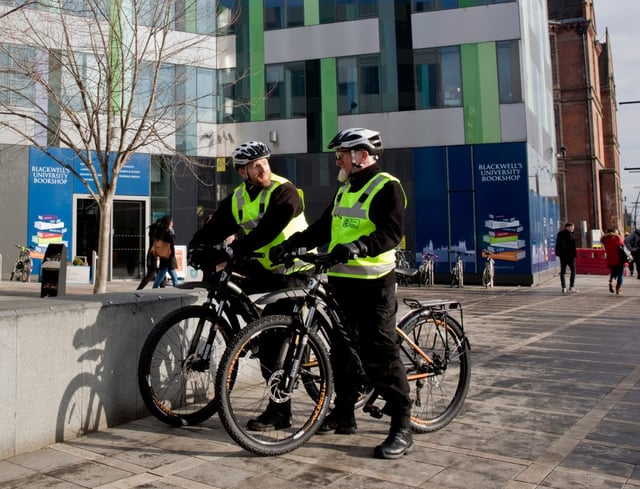 Cycling security staff at the University of Sheffield
As City Region Mayor Dan Jarvis plans his active travel strategy, and Sheffield Council prepares for a ‘clean air zone’ in the city centre, Darren reckons the University’s experience can help other organisations adapt to the coming changes in how we get about.
“It’s easy to see things like a congestion charge as a threat, but we should see it as an opportunity to do things better and smarter. A lot of people only drive out of habit or convenience, and might well be looking at different options.”
The University recently won first place in the South Yorkshire Love to Ride cycling scheme, and Darren is happy to offer advice to other organisations.
A project to offer a free regular bike service on site, by Heeley social enterprise ReCycle Bikes, keeps people cycling who might give up otherwise, he says. “We have some wonderful academics here, but ask them to fix a bike and they often haven’t a clue.”
“Working with the University has been brilliant for us,” said Angela Walker of ReCycle Bikes. “Over our 10 year partnership we've helped students and staff keep their bikes on the road and refurbished over 1000 bikes for students to get around the city.”
All University departments have showers and washing facilities, and recent additions include a small e-bike pool for staff, and e-cargo bikes to transport catering and engineering equipment, which helps keep the campus almost car free and actually saves money.
“One of our lecturers switched to an e-bike to get around the campus more quickly and we worked out the bike paid for itself in nine months due to the time saving,” said Darren.
The costs of electric rather than diesel power for some vehicles are already similar, he says, and a daily city centre charge for diesel vehicles will stack up the electric arguments even more.
The University’s 21 year old transport strategy means many former car parks now host buildings where people are busy teaching and researching. That is, being a lot more productive than the old car parks, Darren notes.
Thinking of that view from the arts tower, he said: “Something’s got to happen, there needs to be some kind of change in Sheffield. For the economy and the air quality, we can’t continue as we are.”
To find out more about how Love to Ride can help your organisation to get more people on bikes, check out our Love to Ride for Business brochure here or if you'd like to find out about about our programme for Universities and Colleges, in partnership with NUS Sustainability, see the UniCycle pages here.
Words and pictures by David Bocking.