How to Spread the (G)Love on Your Ride to Work

Carvel Lonsdale is 54 and he's cycled in the past but 'been on holiday' from his bikes for some years. He works for Lancashire's Children and Families Well Being Service and his cycling goal for 2019 is to ride 2,019 miles. We're sharing his story as a shining example of how sharing the road considerately can foster great relationships between road users. It is also a perfect way to launch our new partnership with Loffi, whose gloves (modelled by Carvel below) make positive interactions between people on bikes and other road users as easy as raising your hand...

As a new employee with Lancashire County Council's Children and Families Wellbeing Service, it was time to lead by example – so cycling to work became my personal well-being project. I have to be honest, I was nervous about both the traffic and my ability to physically tackle the ride. This is the story of how I overcame these barriers – I hope it helps you to begin, or enhance, your ride to work.

To begin with I decided on the route. The choice was either back lanes or major roads. I chose the major roads to be safer. Riding at times when people were rushing to work on narrow twisting roads seemed more of a real problem than fast traffic with plenty of room to get past. The big roads were also flatter, 7.7 miles of rolling terrain. Major roads it was then!

Next decision: which bike? I am lucky – several to choose from! Road, Mountain or single speed?

I deliberated for some time. I wanted a bike that was simple and robust, with a predictable steady speed that wouldn’t be asking me to constantly think about how I was riding. The solution was the old steel, fixed-gear bike. On this bike I would only be able to go at the speed the gearing allowed and having chosen the main road route, it would be smooth enough for the fixie to be a practical solution.

Finally, when to set off to ensure a good experience? This took some planning to practice the ride and estimate recovery at the other end. I decided on a fixed time to set off on the fixed gear bike – a theme was developing!

With plenty of lights and reflective strips attached I began my cycle commute. My logic was simple. Car drivers are isolated from the world around them, so I wanted them to care about me on their commute to work as the rider they 'always' see. How do you connect with people? You make a massive effort to be nice.

Every single car that made the slightest effort to give me room on the road got a wave, not necessarily for them to see but for the driver behind who saw me waving at the car 'making an effort'. It was a lot of waving! After a month, travelling at the same time every day the improvement in drivers’ awareness was incredible. How do I know? Massive clearance on overtakes; hazard warning light winks; not overtaking when there is slow moving traffic; cars I recognise stopping traffic to let me out and cheerful horn honking.

Some days it's hard to keep waving, I've got it down to a kind of salute now, but not only is it keeping me safe I feel connected with 'my’ car drivers. The sense of wellbeing for me is massive, I can literally see the impact of positive relationships.

What about lorries? I make a point of trying to remember the ones that go out of their way to keep me safe and ring up their companies to thank them – Hanson's Cement, Ruttle and Covent Garden Soup Deliveries – AWESOME DRIVERS!

What to do about the close passers? Getting angry only makes it worse. Hopefully they will see my positive interactions with drivers who pass me considerately and realise their error.

Cycling to work, for wellbeing, is the art of fixing lots of stuff with one activity: physical health, green agenda, de-stressing and improving mental health. Who says I can't multi task? Try it – I’m sure you can too. 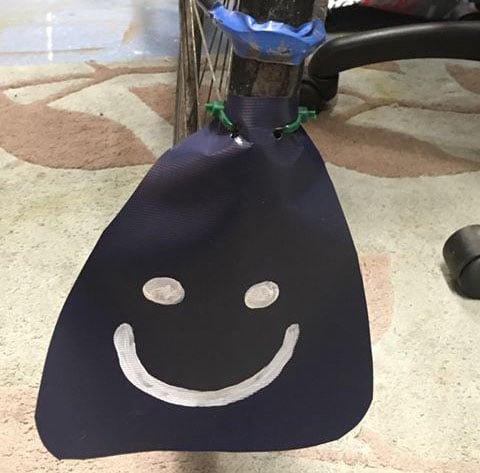 Carvel’s story made us think of the wonderful Loffi gloves that several members of the Love to Ride team bought through their Kickstarter – these excellent cycling gloves are designed to foster friendly communication between people on bikes and other road users. We got Carvel a pair and he loved them so much that he made a fender flap to match! Join us for Ride to Work Week (you can register in one minute at lovetoride.net) and you could win a pair of Loffi's smiling gloves or get a hefty discount - Spread the Glove!