Love to Ride Southampton - taking a peek at progress

In many ways, Love to Ride Southampton is typical of a first-year Love to Ride behaviour change project. A city where, over the years, various infrastructure development and traffic calming measures have been rolled out. There are new cycle lanes, improved access to the National Cycle Network, 20mph zones, a dockless bike sharing scheme, cycle confidence training and popular social enterprises - such as Monty's Bike Hub - that engage local people and give them access to cycling related activity and resources.

Under the MyJourney sustainable travel banner, the council team has been working hard to engage local people, communities and businesses in the benefits of travelling around the city by sustainable means.

The ultimate goal is to replace car journeys with cycling and walking trips, including increased use of the public transport system - to help people move around the city with ease, reducing congested roads and resulting air-borne pollutants.

Crucially, the goal is also to invest in making changes that benefit all communities of Southampton, enabling them to live, work and play in a city fit for future generations.

“Love to Ride play a key part in our plans to develop Southampton into a true cycling city. This programme has already created a vibrant online community for existing and new cyclists where they can encourage one another and share their experiences of cycling in Southampton. We’re looking forward to continuing our successful partnership with Love to Ride and their Ride to Work Week promotion, as part of our upcoming Move in March campaign".    Neil Tuck, Sustainable City Team Leader, Southampton City Council

The city has identified cycling as one of the key ways it can tackle the challenges of air pollution, congestion and physical inactivity that it faces. Southampton adopted its Cycling Strategy in late 2017, setting out ambitious plans to invest over £25m in cycling in the city over a 10 year period. Already over £3m has been spent on new facilities, cycle routes and connectivity across the city with a further £5.3m due to be spent in the coming year. This investment in infrastructure is complemented by a programme of support and incentives using its sustainable travel brand My Journey alongside Love to Ride to help make cycling easier, safer and better.

Changing behaviour and disrupting current, unsustainable travel patterns and modal share is an important part of that strategy, engaging businesses, leaders, communities, stakeholders and people. At Love to Ride we push the 'everyday cycling' message hard, also bucking the trend of gender inequality that is still inherent in cycling.

As is often the case, when Love to Ride were awarded the contract to deliver this city-wide cycling behaviour change project, we weren't starting from scratch. Since 2009, Love to Ride (previously Challenge for Change) have been busy engaging new, occasional and regular riders in towns, cities and whole regions across the UK, inspiring them to encourage other people - friends, work colleagues, family members, neighbours - to enjoy the many benefits that riding a bike brings. This cohort of already-engaged people is often made up by those most likely to help get others on board and in Southampton, we had 150 such people in the area who were up for taking on that role. And so the foundations are laid... 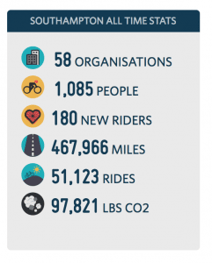 The first intervention we delivered with the city was the UK's National Cycle Challenge - Cycle September. To kick things off in the lead-in to this campaign, the council rolled out additional marketing campaigns - promoting Love to Ride on the back of city buses, on lamppost banners on congested roads and even lift-doors where there was high footfall. The resulting levels of uptake were excellent and to date over 1,000 people have registered, including nearly 200 new riders who were encouraged back into the saddle to enjoy the freedom that riding a bike brings. 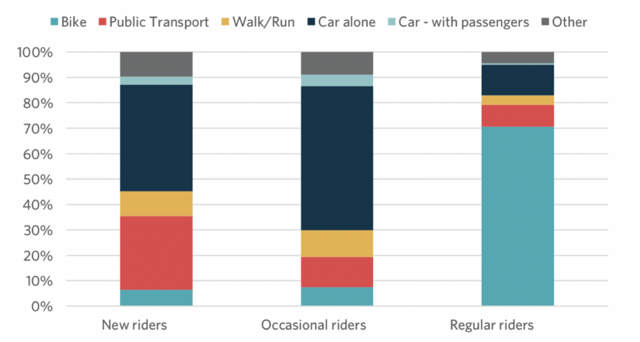 The above table shows the 'main mode of travel' in the city - broken down by rider frequency (New=not at all or hardly ever / Occasional = 3-4 times per month up to 1 time per week / Regular = 3-4 times per week or more). With 42% of new riders driving alone as their main mode of moving around the city, this alone represents an awesome opportunity to really make a big and lasting difference. And that is exactly where Love to Ride comes in.

Other findings and insights from the Cycle September interim report include: 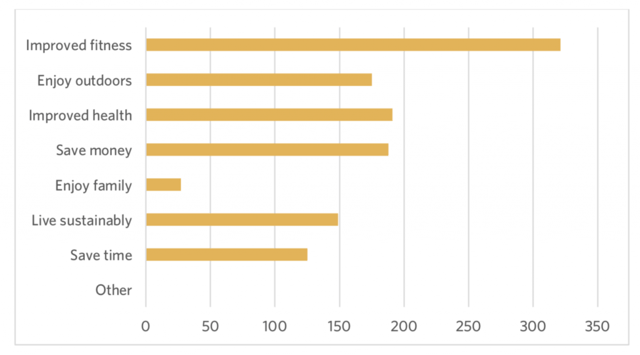 What are the main benefits you want to gain by riding a bike?

We will return to the research when we re-survey people in March 2019 to understand the levels of change people are already achieving and how, for example, this has impacted single occupancy vehicle use in the city. In the first 6 months alone we have engaged 58 organisations, each one with a cycle champion in place and ready to help push out internal comms and help to promote cycling as a great way to get from A to B in and around the city.

YoBike launched an initial fleet of share bikes in Southampton in late 2017, coinciding with the return of the community’s 40,000-strong student population. Following hot on the heels of YoBike's success story in Bristol, this dockless app-powered bike-sharing scheme now has more than 25,000 registered users using a fleet of 1,000 bikes.

Dockless bike schemes have rapidly popped up across the UK over the last 2-3 years, but many have withdrawn due to the end of Chinese investment. However, some city schemes have flourished and Southampton is amongst them.

At Love to Ride we work with bike share schemes to give discounts at key times of the year - i.e. during Ride to Work Week - and thus remove the bike (and potentially the cost) as a potential barrier to cycling and to commuting by bike.

Up next in Southampton is Ride to Work Week as part of their Move in March campaign - the first intervention of 2019. Riding to work, or part of the way, has significant benefits that make people happier, healthier and wealthier. Working with the Travel Team, Sustrans officers, other stakeholders, champions and businesses across Southampton, we will be helping release the many benefits of the cycle commute to employers and employees alike.

Would you like to see more people cycling where you are?

Love to Ride work with cities, regions and entire countries right around the world. As a Bristol-based social business, the team partner with collaborators and advocacy groups to tap into local expertise, using their proven web platform and Ride365 programmes to effect positive change, one bike at a time.

For more information and to discuss working with Love to Ride where you are, email hello@lovetoride.net or take a peek at partners.lovetoride.net