People love hearing what their peers are working on and what’s worked well for them. At Love to Ride we’re lucky enough to work with some brilliant transportation professionals across the globe, so we pulled together 4 questions to ask them. 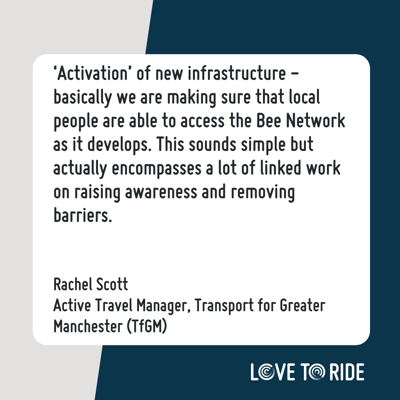 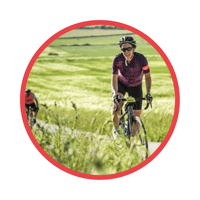 What are you focussing on right now?

‘Activation’ of new infrastructure - basically making sure that local people are able to access the Bee Network as it develops. This sounds simple but actually encompasses a lot of linked work on raising awareness and removing barriers.

Loan bike scheme with the various NHS trusts across Greater Manchester. We’re just getting started on lots of things including a community cycling and walking project funded by the London Marathon Charitable Trust which is going to be really exciting.

So many things – more access to bikes, more inclusive cycling projects, more activity that inspires and empowers other people to get involved and spread the word.

Errrrr my search for the do it all bike has led to me having 6. From a perspective that I am practical (but a little bit adventurous) then I would go for a gravel bike. 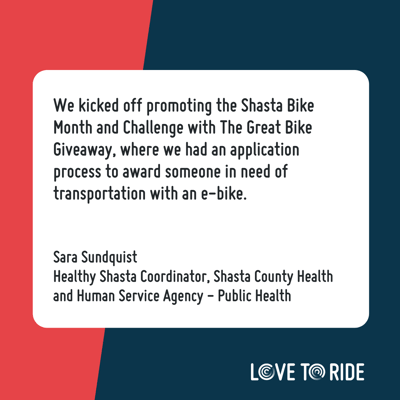 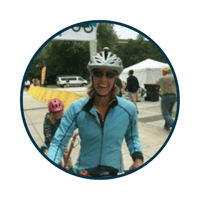 What are you focusing on right now?

Promoting a Hawaiian Island Hop walking challenge, getting people out to Whiskeytown National Recreation Area via the free Beach Bus, and FARM Club, a program at the Farmers’ Market to give kids tokens to buy fresh fruits and veggies. Also preparing for Cycle September to focus on high school and college students to encourage biking to school at the start of the school year!

We kicked off promoting the Shasta Bike Month and Challenge with The Great Bike Giveaway, where we had an application process to award someone in need of transportation with an e-bike. Our local Pedego Redding store gave a deep discount in partnership with the program. When the e-bike was awarded, a teacher from a local school then started an online fundraiser to purchase an e-bike for her custodian, who badly needed more reliable transportation. The community heard about this (again!) and a local business, Sign Creations, fully funded the bike! The rest of the money was used to purchase accessories for the bike and maintenance. The media covered both stories!

We are looking into creating some fun scavenger hunts with the app ‘Scavify’ that the San Diego Bicycle Coalition has had great success using.

An e-cargo bike! The desire to be strong, efficient, and have lots of energy! 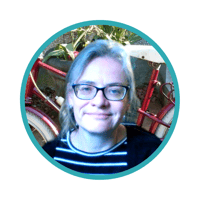 What are you focussing on right now?
Gearing up for the roll out of Nottingham’s 21/22 active travel behaviour change programme in partnership with our delivery partners at Sustrans, Ridewise, Nottingham Bikeworks, British Cycling, and of course Love to Ride, so we can support people to carry on cycling as work and social activities start to reopen. We are really fortunate in Nottingham to have such fantastic partnership working to enable delivery of many of our cycling projects with communities and businesses and we particularly want to make cycling accessible to everyone as an everyday travel choice. We are also starting planning ahead for the next three years so we are ready with our ideas when Department for Transport confirms future funding arrangements for walking and cycling programmes.

What’s something you’ve implemented recently that has worked well?
Last year just after we went into national lockdown we got together with our local active travel delivery partners to set up Nottingham Bike Aid to provide free reconditioned bikes to low income key workers as an emergency response to help those who still needed to work to get there safety in a socially distanced way. Being able to cycle also helped people to decompress after sometimes very stressful days at work so beneficial for both their mental and physical health. A year later the demand for the project is still really strong and we are about to launch the third round of bikes to support another 200 people. Nottingham Bike Aid grew out of the existing jobseeker cycle support package Sustrans provide for us in partnership with Ridewise and Nottingham Bikeworks to address barriers to accessing employment and training by providing personal travel planning, refurbished bikes, cycle training and bike mechanic training, and there are some really great success stories about how the project has helped people gain employment, skills and confidence.

What’s something that you’ve seen implemented in another city/region that you would like to implement locally?
I was really inspired by the work in Yorkshire to develop a network of community bike libraries. Ridewise, a local sustainable travel charity in Nottingham also had the same idea and launched Nottingham’s first bike library in January. Demand has been huge, particularly from families. We are working with Ridewise to look at how we build on the project including providing bikes to schools and ways to make cycling really inclusive and accessible by expanding the library fleet with ebikes and adapted bikes liked to Nottingham’s social prescribing programme

If you were a bike, what would you be and why?
The best thing that has happened this last year for me personally is my 8-year-old learning to ride her bike! We have now bought her a reconditioned bike from Nottingham Bikeworks, who provide cycle mechanic training by refurbishing unwanted bikes, giving them a second life. It’s brilliant to see my daughter gaining confidence and independence from her new cycling skill and so if I were a bike I would want to be my daughter’s little refurbished Pendleton with a basket on the front so I could share all those amazing adventures that she can go on now she can cycle. 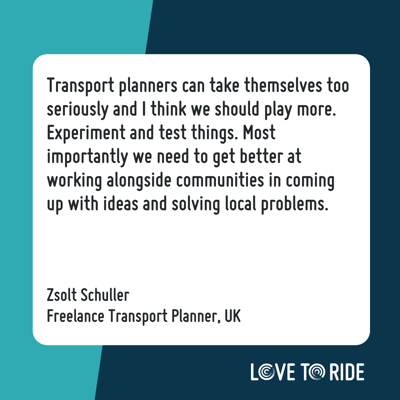 What are you focussing on right now?

Starlings having a huge scrap over our bird feeder in my back garden! From a work perspective, it's all about planning the Tour of Britain Devon Stage at the moment. It's Britain's biggest free to spectate sporting event and to host a stage is a great opportunity to engage and inspire communities to get outdoors and active.
A big part of the effort is working with Devon County Council and the Tour of Britain Team to activate communities. This might be through schools or working with town and parish councils on ideas such as community rides or linking in with projects like Love to Ride. We did that at the community level for the 2018 stage, developing a bespoke Love to Ride package targeted at our start town of Cranbrook.

As well as engagement part of my role is to coordinate making sure the Devon stage comes off without a hitch. This involves working with colleagues to make sure the roads are in good condition, everyone knows it's coming to minimise disruption and that there aren't cars parked on the route

Good question.... I've been fortunate to be involved in quite a lot of exciting projects. It's going back a few years now but between 2006-2011 I project managed DfT's Cycling Demonstration Town in Exeter. There was a real air of optimism around the project from Senior Councillors, Senior officers and an enthusiastic team with a can do attitude. We built lots of infrastructure (around 50km's of new routes, including the Exe Estuary Trail), we promoted it well and rolled out Bikeability Training. Over that time the cycling became normal in Exeter and the 2011 census data showed Exeter ranked in the top 10 cities for increases in cycling. This was only really the start of the journey for the city and it's great to see the current staff raising the bar and pushing for ambitious programmes, most recently through the Emergency Active Travel Fund.

I'd love to see a bit more 'tactical urbanism' with things like parklets, junctions getting planters and treatments to make them nicer for people to walk, cycle or stop and rest. That complemented with play streets and more temporary timed closures to experiment show people what places could be liked. Twitter is full of fantastic examples and I'm hopeful that it will be coming to Exeter soon.
Transport planners can take themselves too seriously and I think we should play more. Experiment and test things. Most importantly we need to get better at working alongside communities in coming up with ideas and solving local problems.

I'd be a late 1980's All Terrain Bike (mountain bike). Why? It's quite heavy, not particularly well put together, likes getting muddy and lost and having fun.

Do you want to be included in the next edition of 4 Questions With...?

4 Questions With… is a great way to share information with your peers. Just answer the following questions and email them to claire@lovetoride.net